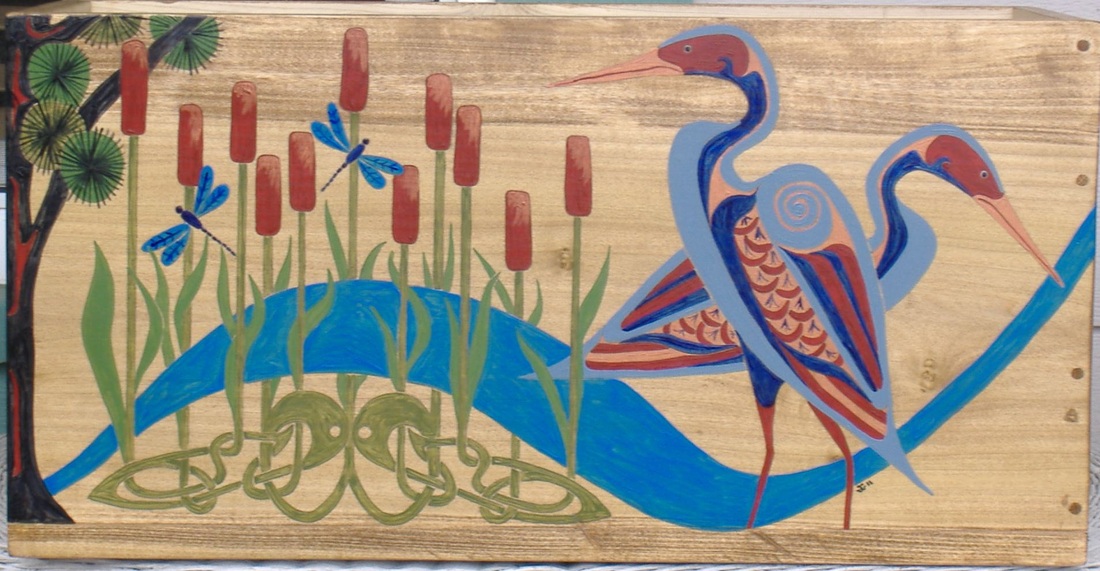 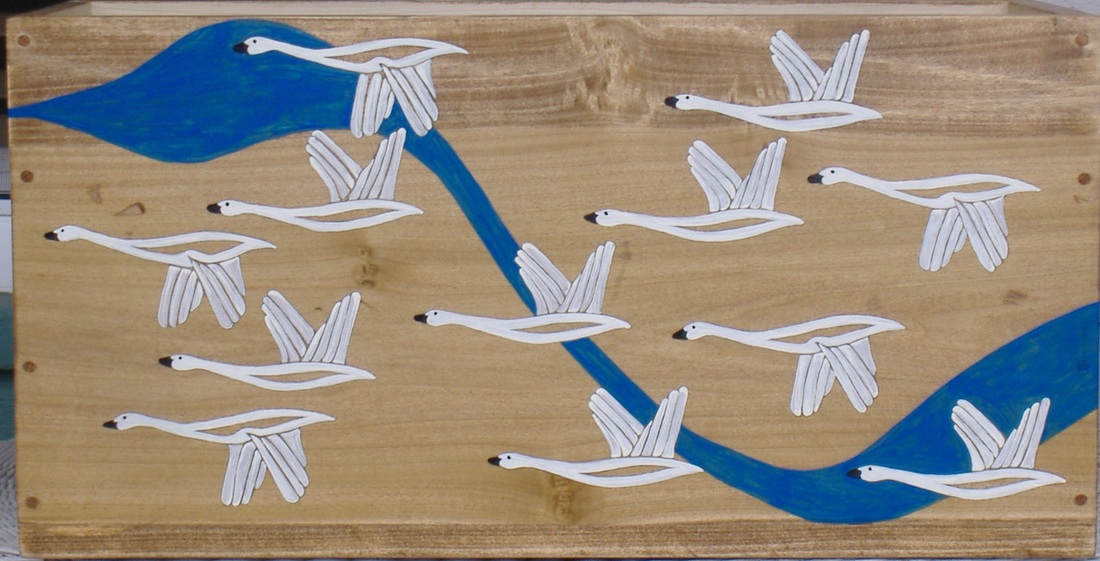 SKAGIT VALLEY CHEST
ACRYLICS ON POPLAR & PINE
(SPRING 2011)
The philosophy behind the Arts & Crafts Movement stressed the functionality of art and promoted the blending of craft with fine art.  Several of its primary tenets were developed in the wake of “discovering” Japanese design in the mid 19th century.  William Morris’s most-famous quote is “Have nothing in your house that you do not know to be useful or believe to be beautiful.”  According to David Mathias, the Japanese aesthetic went one step further stating that the Japanese cultural concept of beauty insisted that “only useful objects that were also beautiful would meet the standard” (Mathias in Greene and Greene Furniture: Poems of Wood & Light, ©2010, page 50).  Similarly, there was a long tradition of creating painted and carved chests on the Northwest Coast where style and function joined.  The essence of any container, whether canoe, house, bowl, or box, held significant meaning to the Native peoples of the coast.  They all held items of greatest value: family, food, prestige, and wealth.  Ira S. Jacknis, in the essay “Functions of the Containers” writes that “special boxes used for the storage of valuables or gifts were elaborately carved and painted with the crest designs of the owners.  These large storage boxes formed the bulk of the furniture found inside the houses” (Jacknis, Boxes and Bowls: Decorated Containers by Nineteenth-Century Haida, Tlingit, Bella Bella, and Tsimshian Indian Artists, ©1974, page 18).  All three of these sources inspired me to continue the tradition of creation where function and art are one.  Thus I chose to build a box of poplar using hand-tool methods and pegged sides and bottom upon which to paint.  Traditional Coast Native bentwood chest designs follow a strict and limiting set of rules of which master artists were able to “bend the rules” slightly to great effect.  The designs on all four sides were integrated in such a way as to pull the viewer in and encourage him to visit, almost in the same way you would invite a guest into your home.  I wanted my chest designs to have this same sense of integration and of welcome.  For my subject matter, I chose the natural bounty of the Skagit Valley.  Throughout the piece the presence of the river is felt, always there in the background, nourishing all.  The valley is a birder’s paradise and even to the casual eye, Great Blue Heron, Red-tailed Hawk, and Trumpeter Swans are easily and often seen.  The river’s adjacent wetlands offer food and shelter for the birds and provide a resting place during the seasonal migrations.  There are also the amazing fields of flowers in the spring, although human-directed, which promote the beauty of the natural world.  There are many influences in the design elements used: Native Coast peoples, Celtic, and Japanese all equally interplay in the design.  The top of the box is made of pine and provides a large overhang, allowing the box to possibly function as a small table.  I love furniture from the Arts & Crafts period and a Liberty & Co armoire we own, with its large, flaring cornice, has been a major inspiration in my art.  This piece, along with the exceptional furniture designed by Charles and Henry Greene, encouraged me to make the box’s lid have such a deep overhang.