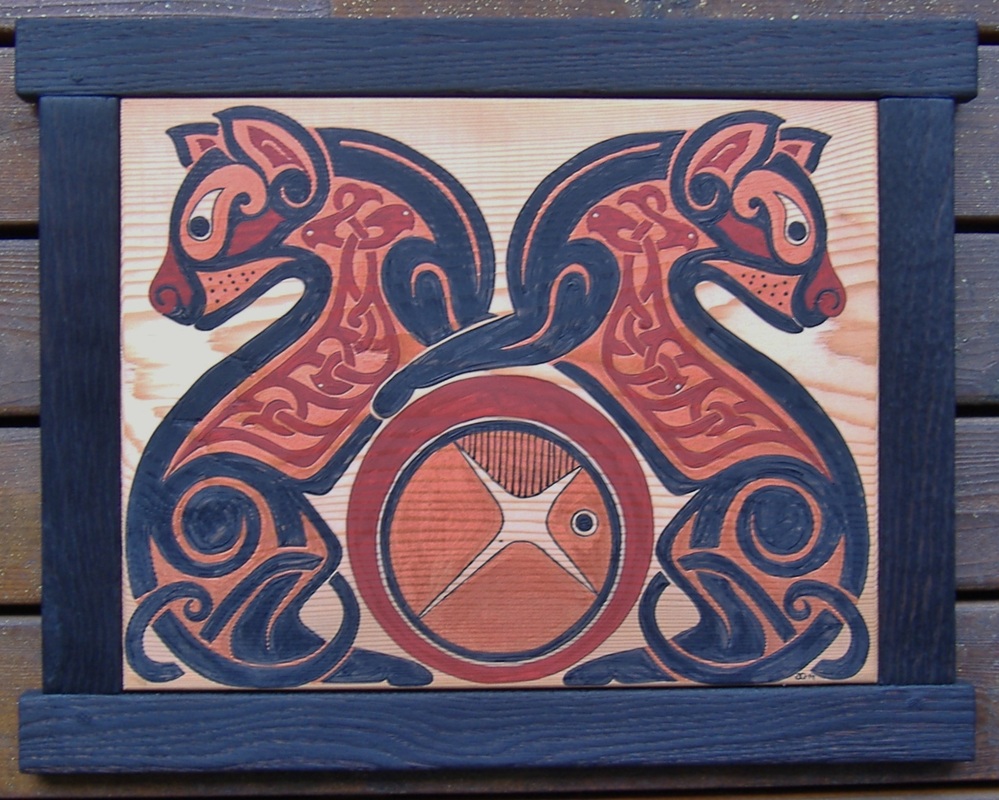 CATS UNITED
ACRYLICS ON RED CEDAR W/RED OAK FRAME
FALL 2014
This is the third tribute to the cats that were part of our family for so long.  Most of the cats that Leigh & I have lived with have been calicos.  Our first cat was Zia Mia, a female calico born in 1976 at Bill & Kathy Lester’s ranger station home at Lake Ozette.  Zia lived at the Ozette dig site for a few months before we all moved to Seattle, and then eventually to Memphis, TN.  Zia loved watching the birds and made a particular “bird noise” while doing so.  While living in Leigh’s grandma’s house after her passing), we got two new female kittens, Lefty and Little Miss.  They were litter-sisters born to Ma Kitty in the barn behind Mama’s house.  All three of the cats made the western journey with us when we moved to Neah Bay in the summer of 1980.  The next addition to our family was Rosie.  One of Charcoal’s kittens, he was born in the outdoor storage room and became Jessie’s cat.  Eventually we reached five cats when Polly was brought into the house by a workman, thinking she was one of ours that had escaped.  Lefty & Little Miss both passed away due to illness.  After Zia passed away, we got Sassy, a kitten from Katherine Chapman’s Neah Bay home.  Polly developed bone cancer and passed away from it, leading to our getting Calpurnia (Cali).  Rosie passed away leaving us with just the two cats, who made the move with us to La Conner in 2003.  Sassy passed away in 2011 and later that summer we got Mookie from Leigh’s friend D’Ann.  Cali passed away in 2014.  This painting is done in remembrance of all the members of our cat family.  The main influence for this painting comes from The Book of Kells and the amazing illustrations of cats found throughout the great book.  The Celtic Revival entrelac of Archibald Knox also played a large part in inspiring my design.  I made the frame out of red oak using pegged, hand-joined, mortise-and-tenon construction methods.  I used the Japanese technique (shou-sugi-ban) of charring and oiling the oak to finish the frame.