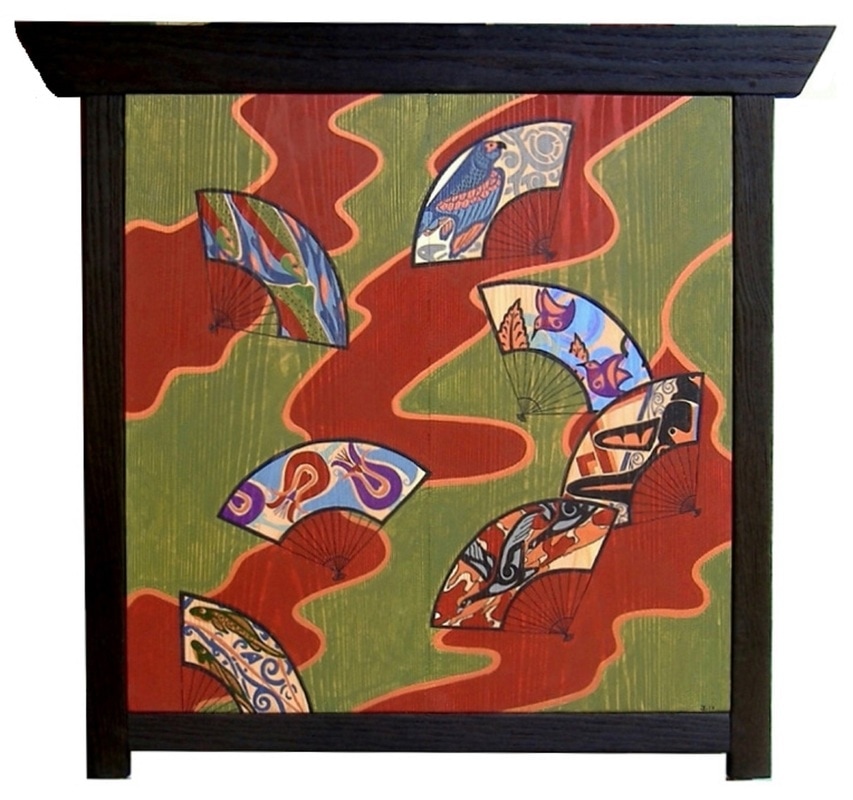 SCATTERED FANS
ACRYLICS ON CEDAR W/RED OAK FRAME
SPRING 2017
I am a huge fan (pun intended) of the Japanese Rinpa School of painting and the works by those artists associated with that design aesthetic will probably always have an influence on my own work.  One of the “founding” painters of Rinpa designs was Tawaraya Sotatsu and his painted screens are celebrated worldwide as some of the greatest works of art.  For this painting I have drawn upon Sotatsu’s Screen with Scattered Fans housed in the Freer Gallery of Art (see Lippit, Yukio and James T. Ulak (eds.), Sotatsu, ©2015, pages 74-75).  Previously I used one of the fans illustrated on this same screen by Sotatsu as the design for my Autumn’s Full Moon painted earlier this year.  For this painting, I transposed designs from several of my earlier paintings onto fans scattered across an undulating background.  The background was inspired by a kosode seen on NHK TV’s Core Kyoto about kyo-kanoko shibori patterns.  This kosode incorporated somewake, broad areas of color produced by shibori or yuzen dyeing techniques.  The fans themselves were “scattered” (chirashi-style) across the design as if they had just been tossed into a flowing stream and I have done the same with my painted fans.   I chose the following paintings to use as my fan designs.  The designs start in the upper left of the painting and rotate clockwise to end at the bottom left.
Fan #1:  Fall Coho on the Wenatchee (Winter 2014)
Fan #2:  Harrier’s Flight (Winter 2014)
Fan #3:  Hummingbird’s Return (Summer 2013)
Fan #4:  Killer Whales (Summer 2012)
Fan #5:  Birds of Fire (Fall 2014)
Fan #6:  Tulips for Mama (Spring 2011
Fan #7:  Kingfisher’s Prize (Spring 2014)
I made the frame out of red oak using pegged, hand-joined, mortise-and-tenon construction methods.   I used the Japanese technique (shou-sugi-ban) of charring and oiling the oak to finish the frame.