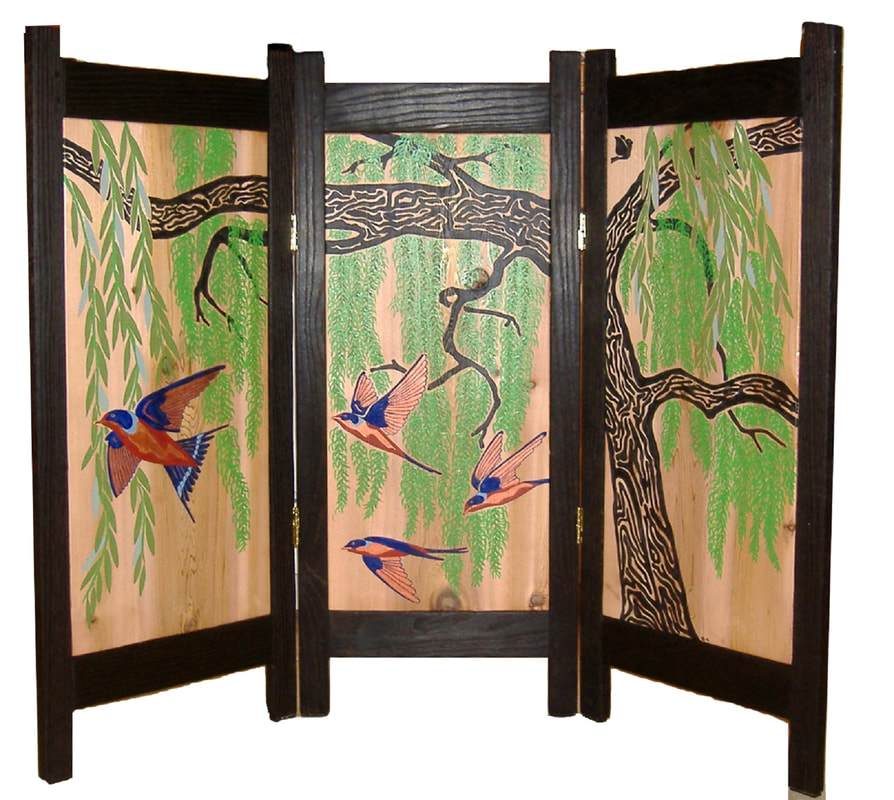 SUMMER SCREEN: SWALLOWS & WILLOW
ACRYLICS ON CEDAR W/RED OAK FRAMES
SUMMER 2016
Recently I have been studying Japanese screen painting and was interested in seeing several painted screens that focused on the changing of the seasons.  Folding screens, or byōbu, have a long tradition in Japan, and often six-panel screens were created in pairs to portray a scene.  I liked the parallel of the twelve individual screens with the twelve months and thought that they make a perfect way to show the seasons.  Thus I decided to do a series of four three-panel screens throughout the year, each representing a particular season.  The plan is to paint each screen during the season portrayed, beginning with winter.  Each screen will include a seasonal bird and tree as their focus.  Also, all four screens will have identically-painted back designs incorporating our “heron mon”, thus showing the screen’s inclusion in the series.
The third in the series, the Summer Screen, depicts a group of swallows flying under the branches of a large weeping willow tree.  I have always loved the graceful shape of weeping willows.  I remember from my childhood a massive, old willow in the back yard of my aunt and uncle’s home.  It was such fun to play under its branches and seemingly hide within this green “cave”.  During the hot Pittsburgh summers, to go under the big tree’s shade “umbrella” was like entering a zone of wonderful coolness.  I admire how Japanese culture developed visual tricks to help people stay cool during the hot summer.  My hope is that the greenery of this painted screen will act in a similar way to help us feel cool, too.  A two-panel folding screen by Japanese Rinpa painter Suzuki Kiitsu entitled Egret and Willow was helpful in designing my screen.
Another sure sign that summer has arrived is the return of the swallows.  Here in the Skagit Valley, we are so blessed with an abundance of bird activity, but the darting and dancing of the swallows as they zoom over the ripening fields is always such a special, and joyful event.  Swallows are amazingly skilled flyers and their voracious appetite for flying insects guarantees a good show for us.  I made the frames for each panel out of red oak using pegged, hand-joined, mortise-and-tenon construction methods.  I used the Japanese technique (shou-sugi-ban) of charring and oiling the oak to finish the frames.  Brass folding screen hinges were used to connect the three panels.