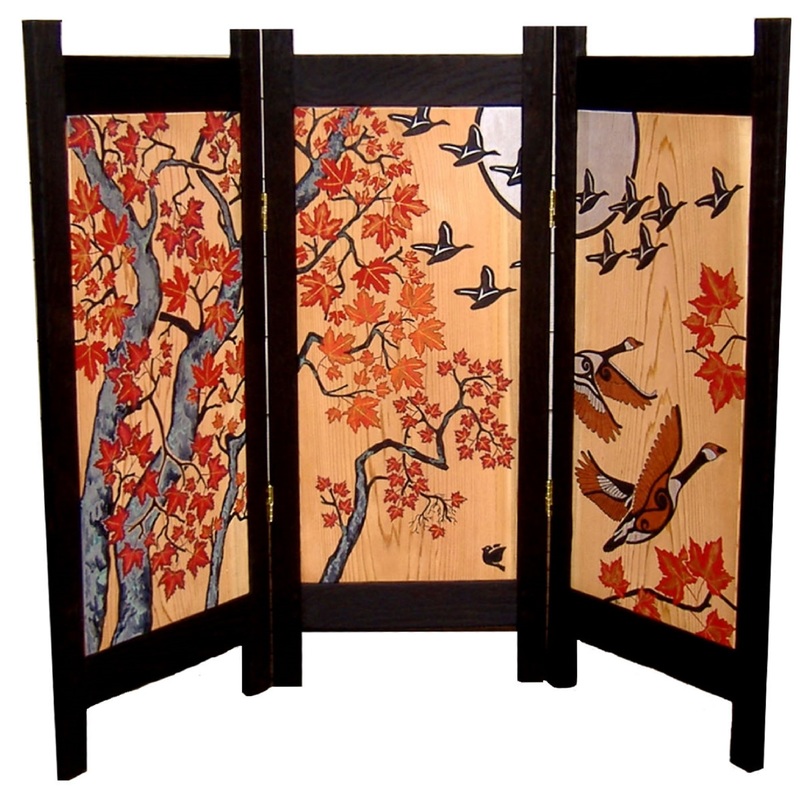 FALL SCREEN: CANADA GEESE & MAPLES
ACRYLICS ON CEDAR W/RED OAK FRAMES
FALL 2016
Recently I have been studying Japanese screen painting and was interested in seeing several painted screens that focused on the changing of the seasons.  Folding screens, or byōbu, have a long tradition in Japan, and often six-panel screens were created in pairs to portray a scene.  I liked the parallel of the twelve individual screens with the twelve months and thought that they make a perfect way to show the seasons.  Thus I decided to do a series of four three-panel screens throughout the year, each representing a particular season.  The plan is to paint each screen during the season portrayed, beginning with winter.  Each screen will include a seasonal bird and tree as their focus.  Also, all four screens will have identically-painted back designs incorporating our “heron mon”, thus showing the screen’s inclusion in the series.
The fourth and final screen in the series, the Fall Screen, strives to show maple trees in all their autumn glory.  All of the autumnal colors are a sight to see, but the maples reign over all in their brilliance.  Here in the Pacific Northwest, with conifers dominating the forest, green is still the key background color.  However, the reds of the vine maples and the golds of bigleaf maple act to signal the change of the season and usher in the fall.  In painting my trees I was most inspired by the many paintings of maples in autumn splendor done by several Japanese artists of the Rinpa School.  Most influential were Sakai Oho’s Autumn Maple (see Carpenter, John T., Designing Nature: The Rinpa Aesthetic in Japanese Art, ©2012, page 153), and Sakai Hoitsu’s Maples and Cherry Trees (see McKelway, Matthew P., Silver Wind: The Arts of Sakai Hoitsu (1761-1828), ©2012, pages 88-89).
Another sign of the beginning of autumn is the return of the geese to the Skagit Valley.  Their arrival seems to be led by Canada geese in the vanguard of the migration south to their winter feeding range, soon followed by the snow geese.  It is so wonderful to hear their calls from above and to see their v-shaped formations as they move across the sky.  With this month’s full moon expected to be the largest in years, I have included this third traditional Japanese symbol of autumn in my composition.  So many Japanese artists have painted geese passing across the disk of the full autumnal moon, but two particularly inspired my design.  Suzuki Kiitsu’s Wild Geese Over the Moon and Hiroshige’s Geese and the Moon were of particular importance as sources of inspiration.  In addition, Tawaraya Sotatsu’s Crane Scroll (see Lippit, Yukio and James T. Ulak (eds.), Sotatsu, ©2015, page 44) and Kayama Matazo’s A Thousand Cranes which derives from it (see Sotatsu, page 320) were helpful with my stylization of the geese formation.  I made the frames for each panel out of red oak using pegged, hand-joined, mortise-and-tenon construction methods.  I used the Japanese technique (shou-sugi-ban) of charring and oiling the oak to finish the frames.  Brass folding screen hinges were used to connect the three panels. 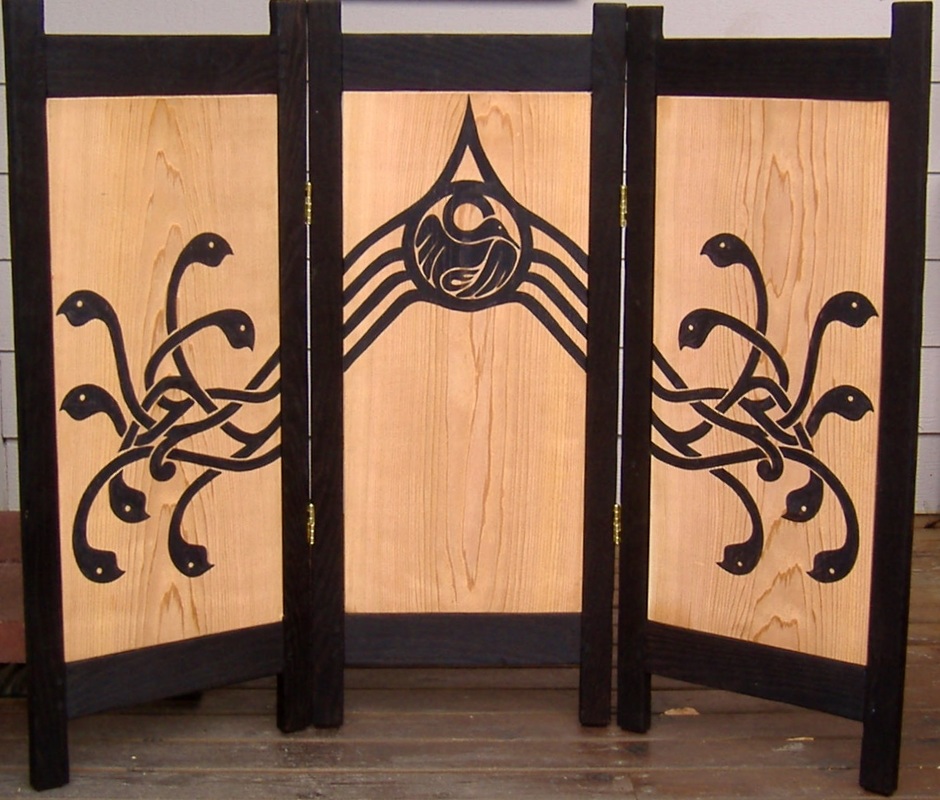