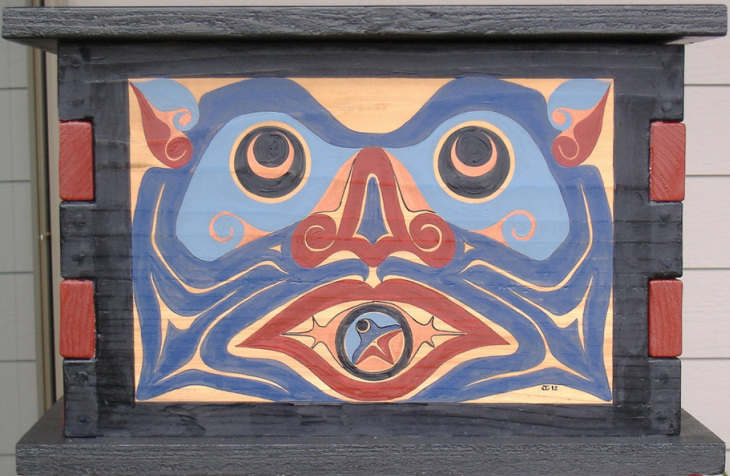 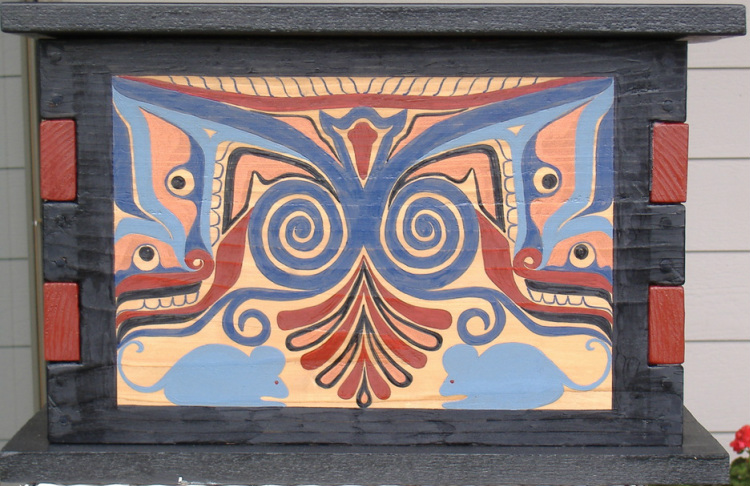 CREATURE OF THE BOX
ACRYLICS ON RED CEDAR
(SPRING 2012)
In the Arts & Crafts philosophy, the joy in creating art is in the designing and executing—in the process of making—and not necessarily in the final product.   Also, to create art that is both attractive and functional is far better that the usual “hang-it-on-the-wall” art.  Thus, by designing and painting boxes, I can bring the functional component into play.  Many of my designs are influenced by Native Northwest Coast Art and especially bentwood boxes, bowls, and chests.  I have been saving two nice one-inch thick red cedar boards for several years and decided to use them to form the sides of the box.  They were purchased from Rose’s Lumber in Port Angeles (long since gone out of business).  The cedar for the top and bottom came from Sound Cedar in Mount Vernon and were part of a beautiful 16-inch wide, one-inch thick red cedar board.  Unfortunately the cedar I have to work with is not conducive to steaming and bending.  Thus I used finger joints to construct the box.  Such joints were sometimes used in constructing traditional NWC chests.  Several Tlingit or Nisga’a chests from nineteenth century having finger or lap joints can be seen in Bill McLennan and Karen Duffek’s 2000 book The Transforming Image: Painted Arts of the Northwest Coast First Nations (pages 198 & 202).  While reading this book, I ran across several interesting discussions that found their way into my box designs.  McLennan & Duffek present the idea of the “creatures of the box” (see pages 122-123), the reoccurring theme of traditional box and chest designs, and this gave me the idea for my box front.  Alert Bay artist Doug Cranmer’s “Killer Whales” panel (see McLennan & Duffek, page 265) was the inspiration for the design in my creature’s mouth and represents a spiritual connection (the Eucharist).  The designs on the sides of my box were influenced by two diverse sources.  I was reading Wendy Hitchmough’s book on British Arts & Crafts architect/designer C.F.A. Voysey (©1995) and saw one of Voysey’s designs for a gate latch which caught my eye (see page 163).  This gate latch was used at Voysey’s Hollybank, designed in 1903.   Voysey liked to use grotesque profile faces as interesting details in his overall design concept.  Influenced by Gothic architecture, I’m sure Voysey intended the designs to represent gargoyles.  At the same time, Voysey’s metalwork design reminded me of the kwakwaka’wakw masks work by Nuxmal dancers as part of the hamatsa/winter ceremony.  Wayne Suttles describes the “Fool Dancers” as messengers and helpers of the hamatsa who act to enforce the law that governs proper potlatch behavior, punishing all transgressions (see Suttles in Aldona Jonaitis (ed.), ©1991, Chiefly Feasts: The Enduring Kwakiutl Potlatch, pages 82 & 83).  The design for the back of my box was inspired by comments Haida artist Robert Davidson made in McLennan & Duffek’s book concerning kugannjaad or “Mouse Woman(page 183).  A reoccurring design on many traditional boxes and chests is a rabbit-like body and profile design that Davidson interpreted to represent Mouse Woman.  Mouse Woman assists those about to cross the boundary between the human and nonhuman worlds and is the spirit of the image in the creature-of-the-box.  The main design on the back of my box was actually inspired by some embroidery I saw on a woman’s blouse and it was an amazing coincidence that this design was so much like the traditional chest design.  Finally, the top of my box represents the kelp beds we saw so often from our living room window while living out by Neah Bay.  The design was inspired by Bill Holm’s discussion about “the donut and the hole” (Holm, “Form in Northwest Coast Art” in Roy L. Carlson (ed.), ©1976, Indian Art Traditions of the Northwest Coast, pages 33-45) and also a traditional Coast Salish comb design from the Strait of Georgia (see Carlson, page 37).  The faces honor two former students of ours who drowned off of Neah Bay. 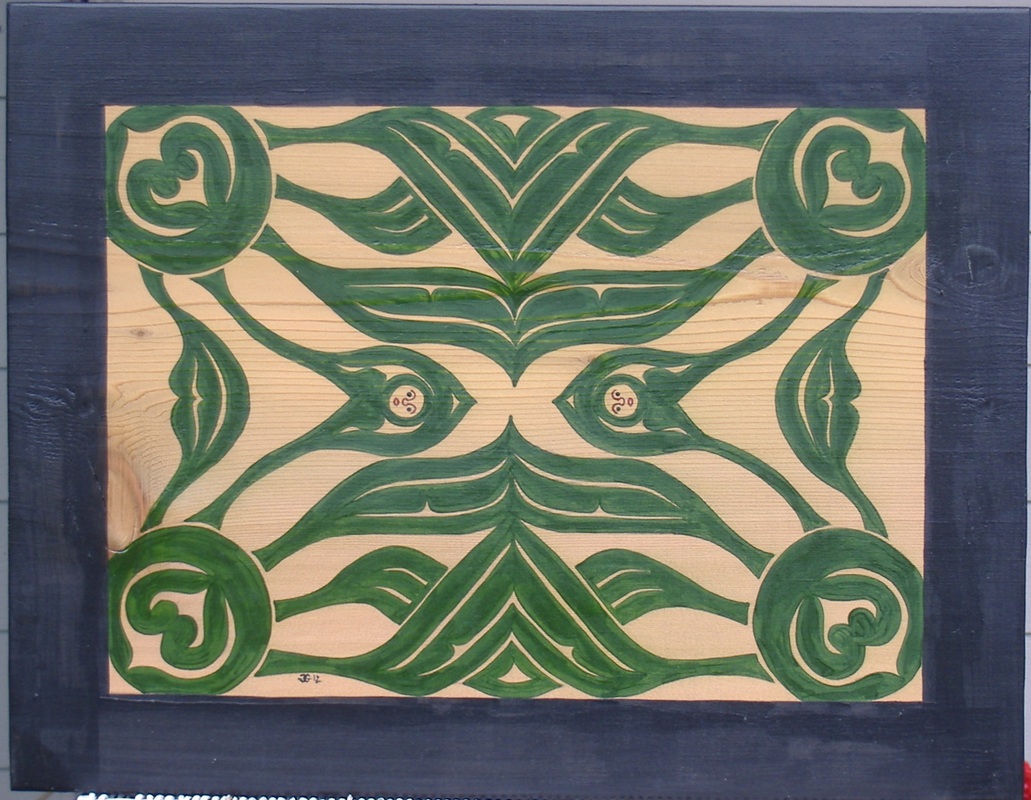