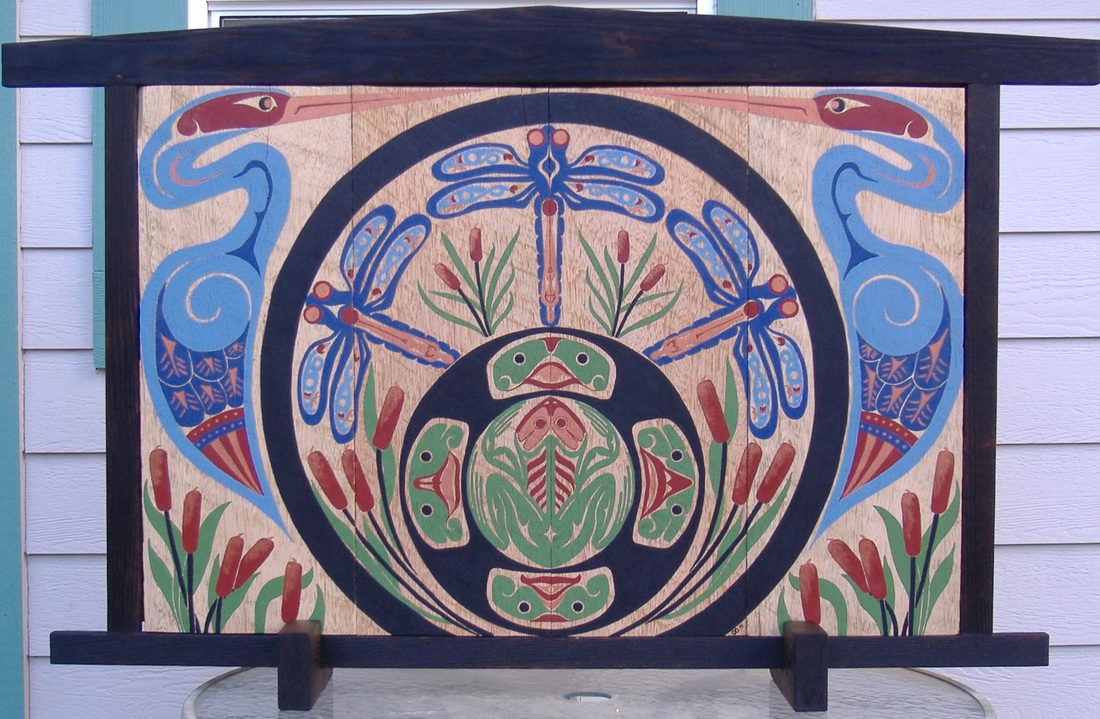 FROG'S HOUSE SCREEN
ACRYLICS ON PHILIPPINE MAHOGANY W/ RED OAK FRAME
(WINTER 2011)
It was early November and the weather was surprisingly mild.  We heard the frogs (wa•q’it in Makah) singing from the wetlands around town and it sounded to me as if all were being invited to come home to the “Frog’s House”.  I was reading Edward Malin’s 1999 book Northwest Coast Indian Painting: House Fronts & Interior Screens and was in the proper frame of mind to think this way.  House fronts and interior screens have always been extremely influential in my development as a painter.  These works of art that were lucky enough to survive the vagaries of time are some of the most amazing displays of the painter’s ability to design and execute on a monumental scale.  Within their cultural context they hold great significance to the owner’s rights and privileges and stress to all viewers his high status and position.  They also act as a physical gate between worlds and as such hold great power.  Although many groups designed wonderful house fronts and screens, those from the Tsimshian seem to speak to me the most strongly.  Tsimshian house fronts were laid in a vertical fashion before being painted and I chose that orientation as well for my boards.  In my painting, the central circle containing the frog body symbolizes the entry to the house.  Such entry holes acted as a pathway to another realm and, according to Malin, forced a person entering by them “to stoop, enforcing this sign of respectful humility” (Malin, 1999, page 53).  Malin goes on to cite Joan Vastokas as saying such openings “represented the point of passage between sacred and profane worlds” (Malin, 1999, page 54).  Thus by entering Frog’s House through this opening, one enters the supernatural realm where human and animal spirits coexist.  As a former biology teacher I also wanted to represent the intersecting circles of predator and prey in the frog’s home, the wetlands.  Thus dragonflies and herons come to accept and honor frog’s invitation.  The dragonflies were inspired by a gold, enamel, & bejeweled necklace designed in 1900 by Rene Lalique and displayed in the Metropolitan Museum of Art.  I painted the designs on two boards of Philippine mahogany (Shorea ssp.) obtained at the Re-Store in Bellingham, WA.  They were once part of a shipping crate.  In the Arts & Crafts tradition, I made the frame out of red oak using pegged, hand-joined, mortise-and-tenon construction methods.  The frame symbolizes the structure of the house itself.  I used the Japanese technique (shou-sugi-ban) of charring and oiling the oak to finish the frame.  I intend this to act as a fireplace screen during the warm months.