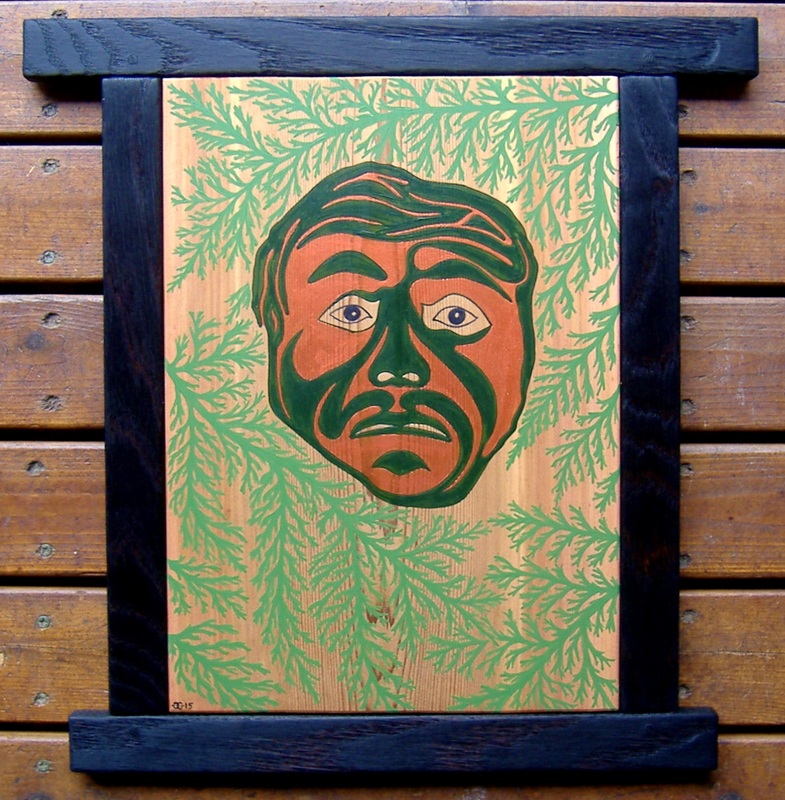 CEDAR GREEN MAN
ACRYLICS ON CEDAR W/RED OAK FRAME
SUMMER 2015
The Green Man is a motif that has survived in Western art since at least the pre-Christian era and it became a popular architectural decoration during medieval times.  At Rosslyn Chapel in Scotland, built during the 15th century, there are over one hundred Green Men scattered throughout the building.  Later, the popularity of the Green Man made a resurgence in the architecture of the Arts & Crafts Movement as an adornment often used on Neo-Gothic buildings.  It has since flourished to become a well-recognized icon and today has become a symbol of the environmental movement.  It is in light of these references that I decided to do a painting of the Green Man.  In Britain, the Green Man is closely associated with oak trees, however, the most culturally important tree of the Pacific Northwest is without question the western red cedar (Thuja plicata).  Thus, I have chosen cedar boughs to form the background surrounding the Green Man, as Green Man becomes Cedar Man.  Back in the late 1970’s while living in Memphis, we went to see the travelling exhibit named “People of the Cedar”.  The cover of the brochure from that exhibit showed a painting on cedar (I think it may have been painted by Ron Hamilton) of “Yellow Cedar Spirit Helper” and it is one of my favorite paintings.  At about the same time, I saw Art Thompson’s “Yellow Cedar Man” print and loved it as well.  Both of these Nuu-chah-nulth works of art inspired me as I did my painting.  For the central portrait, I adapted a photo from Edward S. Curtis entitled “The Whaler” (see Portraits from North American Indian Life by Edward S. Curtis, ©1972, page 39).  This photo spoke to me of the power behind the man and the spirituality involved in the rites of whaling.  His face had to be the face of my Cedar Man.  I also wanted it to show the effects of a face seen in the firelight of a longhouse, where myth and magic can come alive.  I made the frame out of red oak using pegged, hand-joined, mortise-and-tenon construction methods.   I used the Japanese technique (shou-sugi-ban) of charring and oiling the oak to finish the frame. 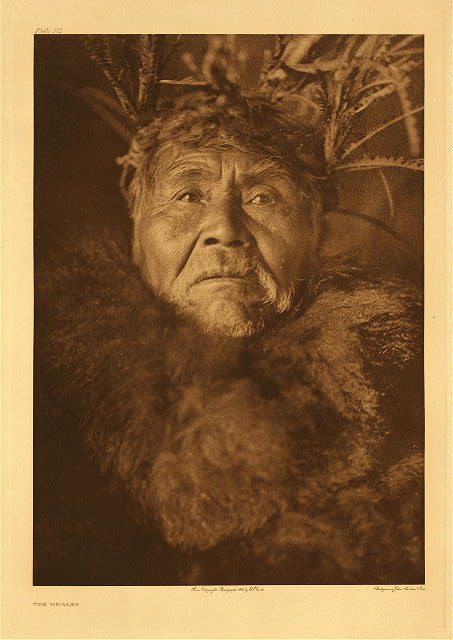