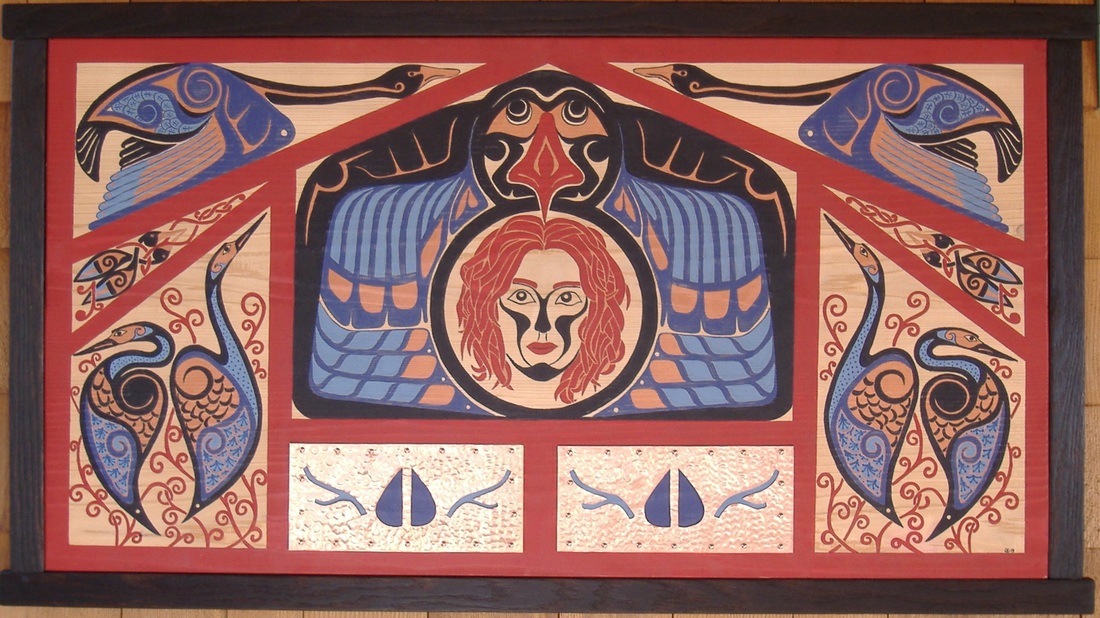 EAGLE EMBRACES HER
ACRYLICS ON CEDAR W/ COPPER AND RED OAK FRAME
(SPRING 2013)
Right now in Skagit Valley, three great birds dominate the sky and it is a joy to watch them.  Swans still blanket the fields, although now fewer in number.   They still fill the sky with their honks as they fly north.   The numbers of bald eagles are swelling as they too migrate north.  And the ever-present great blue herons continue to share their beauty and majesty with us.  All three images emerge in this design with eagle dominating and swan and heron in subservient roles. To many peoples, birds symbolically represent messengers between the world of our reality and the spiritual plane.  To C.F.A. Voysey, the eagle represented “the highest flyer and furthest seer” and thus stood for “aspiration and revelation” in the “heavenward quest” (see Wendy Hitchmough, C.F.A. Voysey, ©1995, pages 142-143).  This painting epitomizes my efforts to blend Northwest Coast Indian art with Celtic design.  The framework and foundation of the piece derives from several aspects of Native Art that are very influential to my work.  First of all, this painting follows in the tradition of the masterworks of Northern (particularly Tsimshian) house front designs and my overall design structure is very “house-like”.  As presented in both Bill McLennan and Karen Duffek’s book The Transforming Image: Painted Arts of the Northwest Coast First Nations (©2000) and in Edward Malin’s Northwest Coast Indian Painting: House Fronts & Interior Screens, (©1999), the interior and exterior screens painted by master artists from the north-central coast are some of the great works of 2-dimensional design.  They have been an inspiration to me for close to forty years and will always be the driving force behind my own designs.  Secondly, my design follows northern style chest designs in that a large central region is flanked by four smaller regions to the sides and bottom.  I did an in-depth study and computer analysis of chest designs back in the late 1970’s in preparation for designing a chest of my own and saw the consistent chest structure present in chests from the Haida, Tsimshian, Heiltsuk, Nisga’a, and Tlingit areas.  McLennan and Duffek again present a multitude of examples that further support this chest-design structure.  A third influence from the coast comes from the unique shape of Kwakwaka’wakw Coppers, symbols of power and wealth.  While reading Bill Holm’s 1983 book Smoky-Top: The Art and Times of Willie Seaweed, I was inspired by the master carver’s copper designs (see pages 61-66) and wanted to incorporate a copper symbolically in my own design.  My central design represents face of the copper and from it the name for this piece is derived.  The two copper panels below the face represent the lower panels of the Copper and the framework of my design represents the T-shaped central ridge.  These three design influences cannot but give my design its fundamental feel of the coast.  But that is just the foundation---the specific design elements mostly come from other sources.  One particular source is Celtic Art, as evidenced in the Celtic spirals, swirls, and entrelac.  The intertwined birds in the triangular regions come indirectly from the Book of Kells and the feather designs for the various birds also derive from the great illuminated manuscript.   Another major source and inspiration for my designs comes from the British Arts & Crafts and Art Nouveau Movements.  The eagle from the central design is another of my adaptations  of Charles Rennie Mackintosh’s carved panels for the pulpit at Queen’s Cross Church in Glasgow (see Fanny Blake, The Essential Charles Rennie Mackintosh, ©2002, pages 90-91).  The central face (taken from a photo of Leigh when she was digging at Pinson Mounds back in the 1970’s) is a combination influence from both Margaret Macdonald Mackintosh and Roy Vickers (specifically see Vickers’s “John 15:13, Hebrews 9:28” in Edwin S. Hall, Jr., Margaret B. Blackman & Vincent Rickard’s Northwest Coast Indian Graphics: An Introduction to Silk Screen Prints (©1981, page 100).  The design on the lower hammered and pierced copper panels comes from Glasgow designer E.A. Taylor.  I particularly like his characteristic split-heart designs (here inverted).  Taylor’s pierced metal and furniture details are well illustrated in The Glasgow Style by Gerald & Celia Larner (©1979, figures 12, 39, 62, and 65).  I made the frame out of red oak using pegged, hand-joined, mortise-and-tenon construction methods.  I used the Japanese technique (shou-sugi-ban) of charring and oiling the oak to finish the frame.